for: string orchestra (6-6-5-4-2)
duration: 18 minutes
premiered: by the Manitoba Chamber Orchestra, Winnipeg, February 27, 1996
CBC Commission, with further assistance from the Sask. Arts Board.

The title of this work is borrowed from a short story by Jorge Luis Borges.  The short story The Circular Ruins deals with themes that recur in Borges’s work: idealism, the manifestation of thoughts in the real world, meaningful dreams, and immortality. 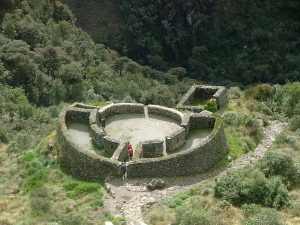 The musical work Circular Ruins is a symmetrically-structured, three movement work for string orchestra. Movement one–with its slow basic pulse gradually giving way to faster motion–is like a miniature concerto featuring solo violin. Movement two is fast, syncopated and features string harmonics as a prominent colouristic element. This movement is, for the most part, grounded in tonality, however, the rhythmic uncertainty of much of the music undermines this harmonic stability. As seen in movement one, the third movement marks a return to slow, almost ritualistic music with individual solo lines occasionally appearing above the larger mass of instruments.

Circular Ruins was commissioned by the Manitoba Chamber Orchestra with funding provided by the Canadian Broadcasting Corporation and the Saskatchewan Arts Board.