The Guitar Sonata makes use of functional as well as non-functional harmony. I am attempting to use the guitar in a number of its idiomatic capacities: ie, chordally as well as polyphonically with full use of harmonics and the sonorous possibilities of the open strings. 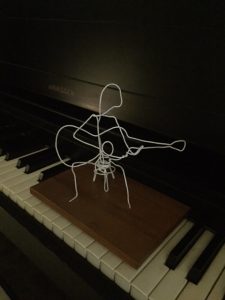 The form and arrangements of the movements are traditional, with the sonata form of the first movement, the lighter scherzo-trio, and the imitative, rondo finale. The final movement pays hommage to William Walton in the A major section. This Walton theme, stated first in harmonics then placed in a jazz – blues setting, unfolds the descending minor third interval, which harkens back to the opening statement of the first movement.

The Guitar Sonata was composed in 1984, revised in 1987 and is approximately 9 minutes long.